Gartner Says There are Ghosts and Zombies in Your Data Center!

Home/IT Project Management (PMO)/ITAD/Gartner Says There are Ghosts and Zombies in Your Data Center!

A 2016 Gartner study of the top ten technology trends causing substantial changes and challenges in data centers uncovers a chilling story: there are ghosts and zombies in your data centers. These trends will have a significant impact on organizations, and there is high potential for disruption in business that could require major IT investments or changes in long-term initiatives. Being late to adapt to these trends can be a risky move.

The Disappearing Data Center and the Rise of Ghost Servers

The top-ranked technology trend mentioned on the list is the “Disappearing Data Center.” With an increase in systems being moved off-premise and managed in the cloud, it is becoming significantly more complex for IT managers to optimally operate their data centers. Gartner revealed that 28% of the physical servers in data centers are “ghost” servers, also referred to as “zombie” or “comatose” servers. These ghost servers are using energy but not being utilized within the infrastructure. Another issue highlighted in the study is that 40% of racks in data centers are underutilized, wasting space and preventing functioning servers from operating at maximum capacity. Most servers examined in the study operate at only 32% of their optimal performance capacity. 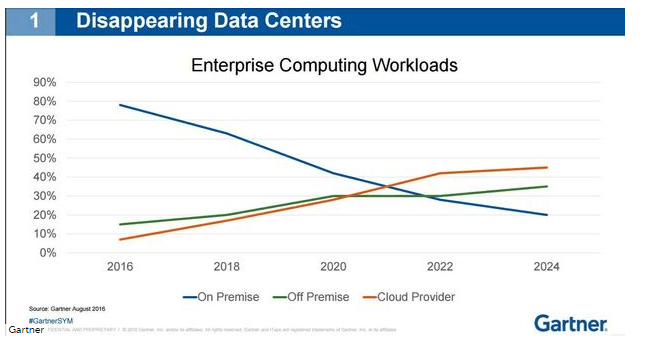 How to Combat the Rise of “Zombie” Servers

A server is considered “zombie” or “comatose” after six months of inactivity—meaning that it has not delivered any information or computed services. Identifying comatose hardware can be difficult using conventional tools. Measuring CPU and memory usage is not enough to identify servers that have turned into zombies. Data center managers need to take into consideration upstream traffic or user access information per server, virtualization, and workload distribution structures. This tactic identifies the IT equipment that’s not providing any value, ensuring that decommissioning it will not be a risk to the organization.

Decommissioning unused IT hardware can help turn those “zombie” servers, that do nothing but waste energy and take up space, into revenue. Once you identify these machines, you should consider hiring an expert to perform a fair market value assessment of all your unused equipment. If your IT equipment holds value, you can decide if you want to re-purpose it or sell it for a profit. CentricsIT provides a variety of IT asset disposition services that are customized to your business needs and guaranteed to provide the maximum return on your IT investments, while ensuring data security to the highest standards.

Another consideration should be a reduction in energy consumption. A study from June 2016 released by the U.S. Department of Energy’s Lawrence Berkeley National Laboratory is a glimpse of good news.  Improvements have been recorded in the electricity consumption of data centers, after a long period of large increases. Research indicates that continued practices in energy efficient operations, along with the rising shift from local data centers to cloud environments, could cut energy use by an additional 45% by 2020. With a strong awareness of your data center, you can reduce costs, decrease environmental impact, and improve efficiency. Click here for four steps you could take to make your data center more energy efficient.

The high percentage of “zombie” servers present in current data centers is a clear indication that companies need to find better ways to utilize their IT resources. The needed changes are not just on the technical front, but around internal management, communication, and effective energy consumption practices. Fixing these inefficiencies should be a major focus for all companies in 2016 and beyond. For specific action items around cleaning up your IT infrastructure, refer to this post.

No one wants to be the next big data breach—especially through your old data storage assets.

Learn how to protect your company's reputation and data during the decommissioning process with this free comprehensive guide to secure ITAD.
DOWNLOAD